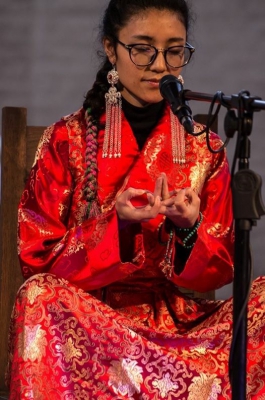 Dakini Drukmo Gyal sings Mantras as well as traditional and modern songs and presents them in a musical performance in 6 different styles of Tibetan music.

Dakini lived in a Ngakpa-family which dates back to six generation. She and her family belong to the “Old School” of the Tibetan Buddhism. As from 2008, she learnt from his grandfather how to sing mantras.

In 2010, she participated in a national music competition known as “ Hua Er Duo Duo” whereby she was placed among the top 40 in China. She then started to intensely concentrate on her musical career and has since then composed songs to share emotions/feelings in and about our common world.